Our GoalFriend! Chef Mel Turns a Passion For Cooking Into Burgeoning Business 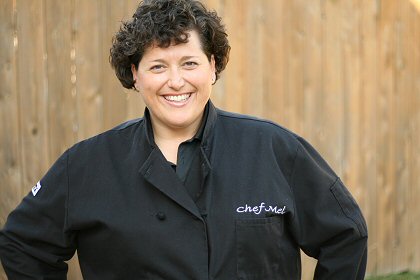 Our St. Louis GoalFriend has taken her passion for cooking and turned it into a thriving business. Check it out!

“This Manchester woman turned a “great recipe” into a booming business. See how her entrepreneurial spirit shines through.”

“Driven by her self-confidence and the encouragement of her friends, Dodd has spent the last eight years working diligently to build and expand her brand of Chef Mel sauces.”

“I didn’t like any red sauce anywhere, so I started making my own. And it just kind of went from there,” she said.

“In 2003, Dodd was working as a physical therapy assistant at St. Luke’s Hospital. Potlucks were often held at work. It was there that the sauce was first exposed to a wider audience. There were rave reviews were from the start.”

“At St. Luke’s, lots of people bought my stuff,” she said. “I would get orders all the time. I had a little tote-type bag on wheels and would fill it up and go to different floors, and they would be like ‘OK she’s here. The sauce lady’s here.’”

“Dodd said that St. Luke’s was filled with encouraging people and people who have supported her. “If you get enough encouragement, you’re like ‘OK I guess I’m going to go for it.’ And that’s what I did,” Dodd said.”

“In 2004, she took her wares to her first trade show, held at Parkway West High School. The positive reviews and encouragement kept pouring in. In 2006, two of Dodd’s close friends, who loved her cooking and believed others would too, said they were willing to risk some of their own money and help take Dodd’s brand to the next level. Dodd spent the next year preparing to do just that. However, she said her two friends had to back out due to unexpected obligations.”

“But not long after the initial investors collapsed, Dodd received a phone call from someone who has willing and able to give her some start-up capital.”

“Chef Mel became a corporation in 2008, and the red sauce went into mass production. Instead of making a handful of batches in a large pot in her kitchen, Dodd’s sauce was being produced by the 55-gallon drum.”

“Though Dodd’s sauce has since enjoyed a growing market and customer base, the success hasn’t all come easy to her. Dodd said she was naive early on, thinking that a great recipe was the only thing she would need to build a strong company.”

“For Dodd, persistence has paid off. Her product is now available in all of the Straub’s Markets, as well as about 30 other grocery stores. She has also been invited to do live cooking demonstrations with Fox 2’s Tim Ezell and on KMOV’s Great Day St. Louis.”

“Even as the number of retail outlets buying her sauce increases, the savvy business side of Dodd is thinking of other ways to expand her brand as well. She has created a Chef Mel salsa and said even opening a restaurant one day is definitely in the realm of possibilities.”

“But a Chef Mel restaurant is not the absolute end that Dodd has in mind. She readily admits to thinking about one day being able to take the brand national and even herself becoming a household name like Rachel Ray or Emeril Lagasse.”

“Even while her business is still in its early stages, Dodd is already thinking of ways she could give back if she did attain national success. Dodd said she would one day like to help another entrepreneur make a go of it. She would love to be someone else’s “anonymous angel,” she said.”

Persistence and setting-goals, we are proud to have you as a GoalFriend!